Breed number four in our December Blog series is another type of Bulldog, the French Bulldog, to be specific. These adorable members of the Non-sporting group can be great pets for almost anyone and do well in any type of household, just as long as they have access to air conditioning.

French Bulldogs are probably so popular because they’re extremely friendly and fun to spend time with. They are definitely a big dog in a small package! Over the past few years, the French Bulldog has become especially popular with city-dwellers. He doesn’t need much exercise, and he isn’t a big barker, which makes him ideally suited to apartment or townhome living. Frenchies have also become popular with the rich and famous. Martha Stewart’s pack of Frenchies have their own social media followings, and Leonardo DiCaprio is also a Frenchie fan.

French Bulldogs stand between 10 and 12 inches at the shoulder and can weigh up to 28 pounds. They come in a number of colors and patterns. The breed is known for its distinctive bat ears and bowlegged gait. He is also a brachycephalic breed, which means he has a flat, squished-in face.

Grooming needs are pretty minimal. Frenchies need to be brushed once or twice a week. Ears should be checked and cleaned weekly, and nails should be trimmed every two weeks or so. The wrinkles on Frenchie faces need to be cleaned at least twice a week in order to keep them dry and free of infections. Wipe the crud out of the folds with a baby wipe and dry thoroughly. Also, be sure to brush a Frenchie’s teeth at least once a week for optimal dental health!

Frenchies are prone to weight gain because they can’t tolerate a lot of exercise. They have difficulty breathing because of their squishy faces, which also means they can have trouble regulating their body temperature. Since the French Bulldog loves any and all food, monitoring his weight will be of paramount importance throughout his life.

While rigorous exercise is bad for a French Bulldog because of his breathing issues, he can go on 15 to 20-minute walks as long as the weather is good. As with any flat-faced breed, heatstroke can be a problem, so be sure your Frenchie has access to air conditioning. In addition to the aforementioned health troubles, Frenchies can suffer from spinal malformations and a spinal condition called Intervertebral Disc Disease. Reproductive problems are also common with this breed. 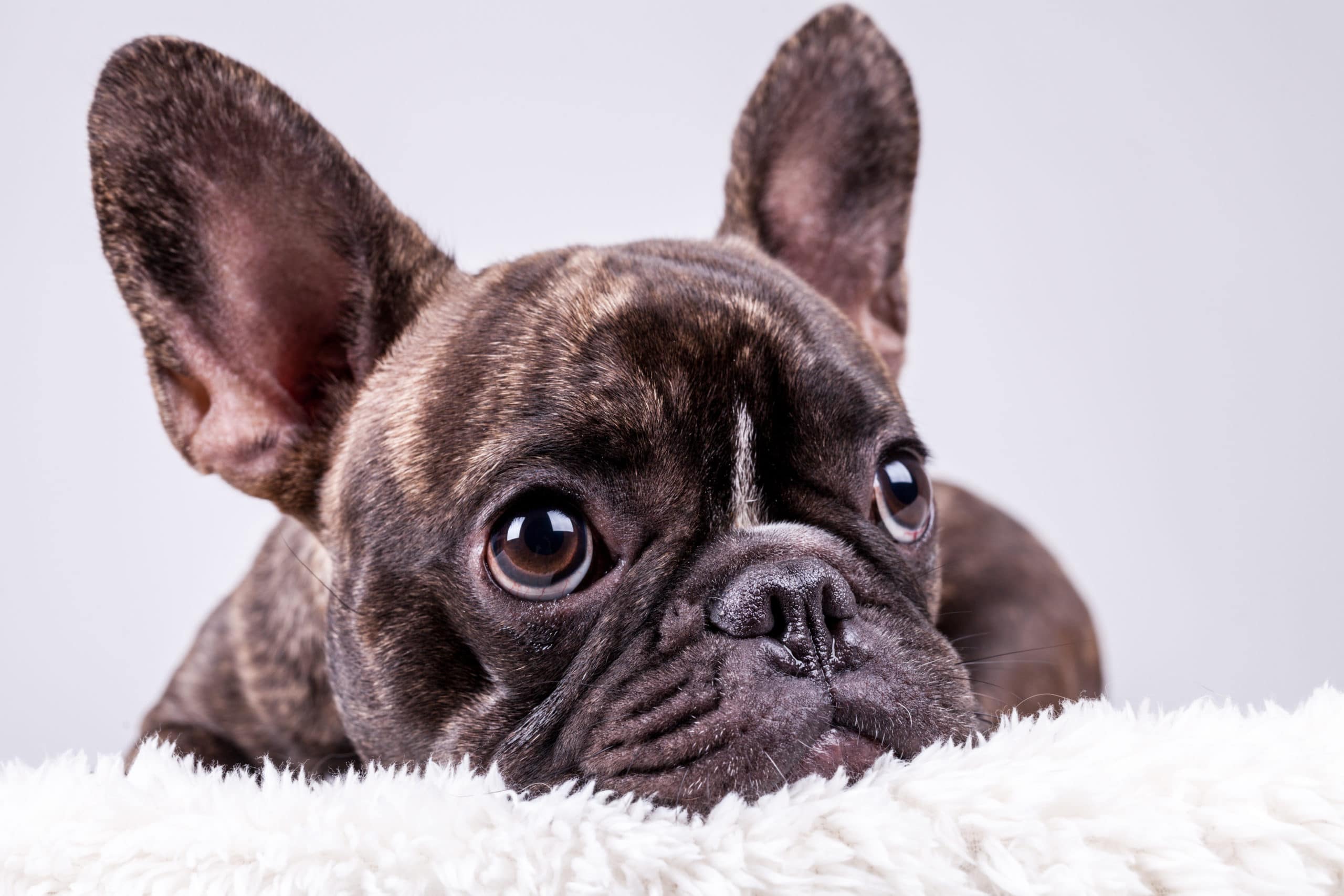 Frenchies are loyal, loving lapdogs! They tend to follow their humans around the house without making nuisances of themselves. This breed gets along with almost everyone, but they do require early socialization with other dogs. Many reputable breeders will not send French Bulldog puppies home until 10 or 11 weeks of age. Frenchies tend to be on the pushier side when it comes to interacting with other dogs, so breeders want them to spend extra time with their littermates in order to learn good manners from pups they already know. Even so, socialize your puppy with other dogs once he comes home. Puppy kindergarten classes are great for this. Patient, and vaccinated, dogs belonging to family and friends may also be willing to help new puppies learn proper canine etiquette. Frenchies have loads of charisma and love all human attention. They love to play and tend to be hard on dog toys. All new toys should be durable, if you want them to last for any length of time, that is. Frenchies also love hiding toys and then making the humans search for them.

Frenchies are often stubborn when it comes to training. They prefer to learn on their own terms, so be sure to figure out their favorite reward when you really need them to focus. They love putting their own spin on commands, especially if they have an audience! As with most dog breeds, the Frenchie is prone to obnoxious and destructive behaviors like barking and digging if left to his own devices for too long. These super-cute little dogs have been bred to be the perfect companion, which means they get very attached to their people. Separation anxiety can be a problem with this breed, so teaching them to be alone gradually is important for their, and your, mental health. If you work long hours or travel often, this breed may not be ideal unless you’re willing to hire dog walkers or use pet sitters.

The “Bouldogge Francaise,” as he is known in his adopted homeland, actually originated in England, in the city of Nottingham. Bulldogs were popular companions back then for lace workers, keeping them company and ridding their workrooms of rats. After the industrial revolution, lacemaking became mechanized and most lace workers lost their jobs. Since handmade lace was still popular in France, some of these people emigrated to that country. Naturally, their little dogs came along, too!

They instantly captured the attention of French shopkeepers. Eventually, the breed became popular with the Parisian bohemian set, artists, novelists, and wealthy Americans doing the grand tour. Frenchies were even the subjects of some impressionist paintings!

Their popularity has continued to rise, especially throughout the past decade or so. Today, the French Bulldog is a wonderful companion, and their funny, friendly personalities have helped them become the fourth most popular dog breed in the United States!

We know, we know, another British dog breed! British people have a lot of the same Christmas traditions that we do here in the U.S., with a few variations.

Speaking of pudding, there’s also Christmas pudding, which is yet again different. It’s similar to a fruitcake, except fluffier and apparently more edible, because it’s probably the most popular Christmas dessert in England. Trifle is another popular, and delicious, dessert. Be sure to try one if you ever get the chance!

We hope you’ve enjoyed our quick look at the always adorable French Bulldog. Be sure to check back to learn about dog breed number three!