Welcome back to our Twelve Breeds of Christmas blog series, in which we show off the year’s top twelve dog breeds, as recorded by the American Kennel Club (AKC.) Breed number five on the list for 2020 is everyone’s favorite mascot, the Bulldog!

Bulldogs are well-known for their affable temperaments, and distinctively adorable appearance. Today, they are primarily beloved as gentle family pets, but they were originally bred to fight bulls for sport. The breeds bravery and devotion are traits popular among sports fans, which is why the Bulldog is the mascot for at least two NCAA football teams, along with the United States Marine Core. Generally, these are laid-back pups who still enjoy moderate exercise.

The Bulldog is a medium-sized breed. He usually weighs between 40 and 60 pounds, but there is no specific height according to the breed standard. The Bulldog has a glossy, short coat that comes in a variety of colors and patterns. They have pushed-in faces, a short snout, and a distinctive rolling gait that makes them almost impossible not to recognize.

Grooming is pretty low maintenance in terms of coat upkeep. Bulldogs don’t shed very much, so a weekly brushing is usually sufficient. This breed can have skin issues that need to be kept in check though. It’s important to examine the facial wrinkles and keep them as clean as possible. Food, dirt, and moisture can become trapped in the folds, causing them to become infected. Using peroxide to clean the wrinkles will help. Cornstarch can be applied afterward in order to help with drying the skin. Be sure also to keep ears clean, along with the area under the tail.

Since Bulldogs can’t always tolerate a lot of exercises, they are prone to weight gain. It’s a good idea to watch their weight and calory intake to prevent weight problems later in life. Bulldogs are also prone to heatstroke because they are not built to handle hot weather. They should always have access to air-conditioned comfort during the summer months, and exercise should be restricted during even moderate heat to help prevent problems.

If you’re considering a Bulldog puppy, be warned that they may cost more than other breeds. Because of the size of their heads, most Bulldog puppies must be born via Cesarian section, which requires a Veterinarian, which costs money. Breeders may pass this expense on to puppy buyers.

If you’re searching for a dog with the perfect temperament, and you understand the health concerns, Bulldogs make wonderful companions! They get along well with almost all people, including children, and they don’t need much in the way of exercise. These are clever, sweet dogs who really love to please their people! They have a fantastic sense of humor and draw crowds wherever they go.

As with any dog breed, early socialization is extremely important, along with puppy classes. Exposing Bulldog puppies to other types of dogs at a young age will help them make more canine friends as adults. Bulldogs are usually big chewers and will often enjoy chewing toys throughout their lives. They are easy to train and respond to food rewards but should receive fair and consistent training when it comes to house manners. Bulldogs are a breed known for resource guarding, especially when it comes to food, getting them used to being touched or handled while eating, up to a point, is often helpful. 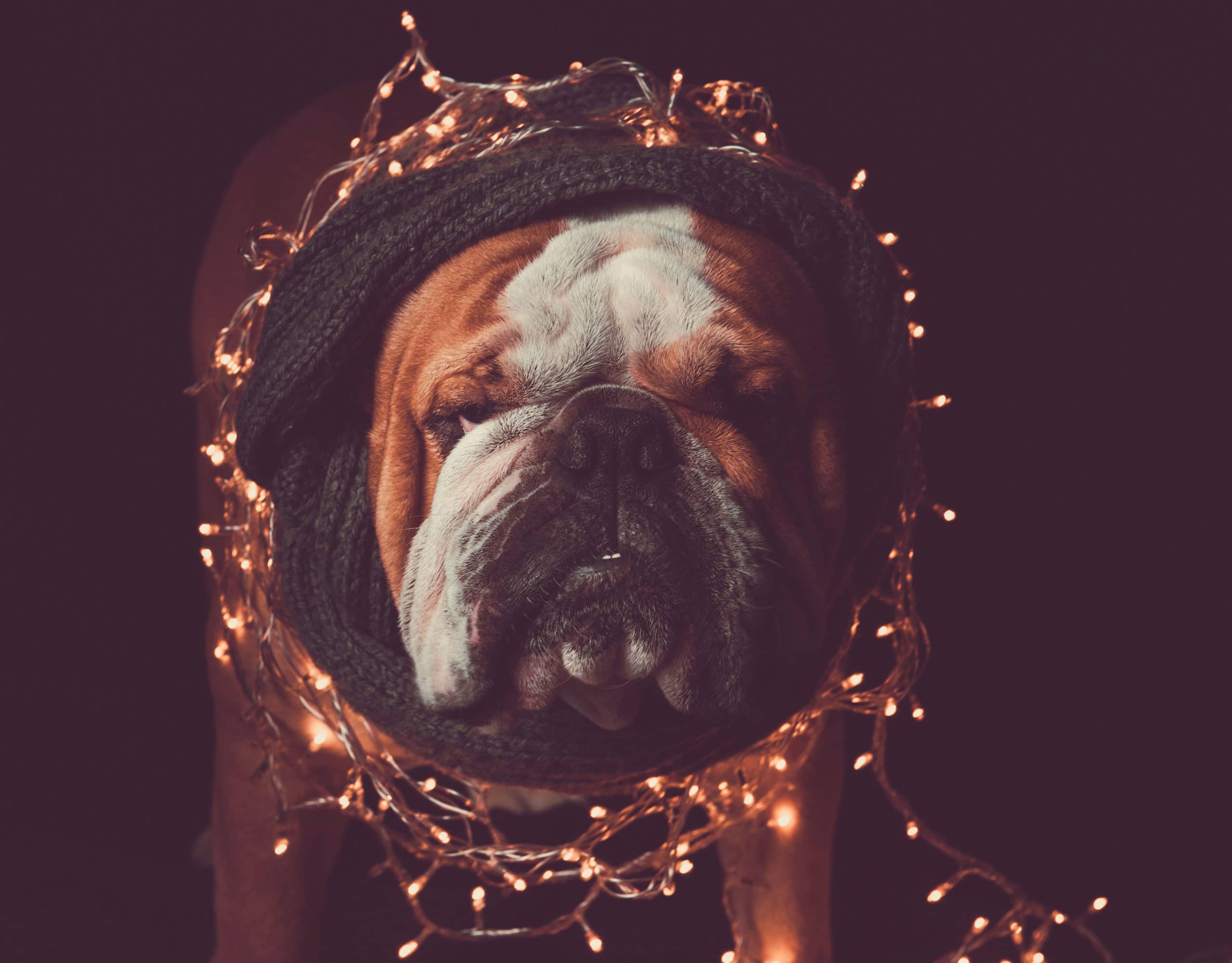 Bulldogs don’t often participate in dog sports because they physically can’t do so due to their short snouts. They do enjoy walks on-leash, but not in hot weather. Swimming is also not good for them, although hanging out in shallow water is fine. Bulldogs are a loving, happy breed that really enjoys spending time with their families. They’re fun, affectionate nature makes them very popular companions. If you know what you’re getting into in the health department, the Bulldog can be a wonderful, adorable friend!

Historical evidence suggests that Bulldogs were originally created in 13th-century England, during the reign of King John, for the sport of Bullbaiting, in which a staked bull fought a pack of dogs, while spectators placed bets on the outcome. The ancestors of today’s Bulldog, who had to participate in this sport, were huge, ferocious animals that were almost impervious to pain.

Happily, for everyone, the British banned sports like Bullbaiting in the year 1835. Sadly, with bullbaiting now illegal and obsolete, the Bulldog began to dwindle in popularity. In response, Bulldog admirers began the long process of transforming the breed from fighting dogs to family companions. By the year 1886, Bulldog fanciers had created a sweeter, mellower Bulldog, noted for his friendly demeanor and love of children. He was also smaller and more attractive than his more ferocious ancestors.

Once he came over to the United States, his history as a fighting dog, combined with his updated new look, made him an instant sensation. The Bulldog became the mascot for Yale University and the University of Georgia. He also serves as the wrinkly face of the Mack Truck company and the U.S. Marine Core. 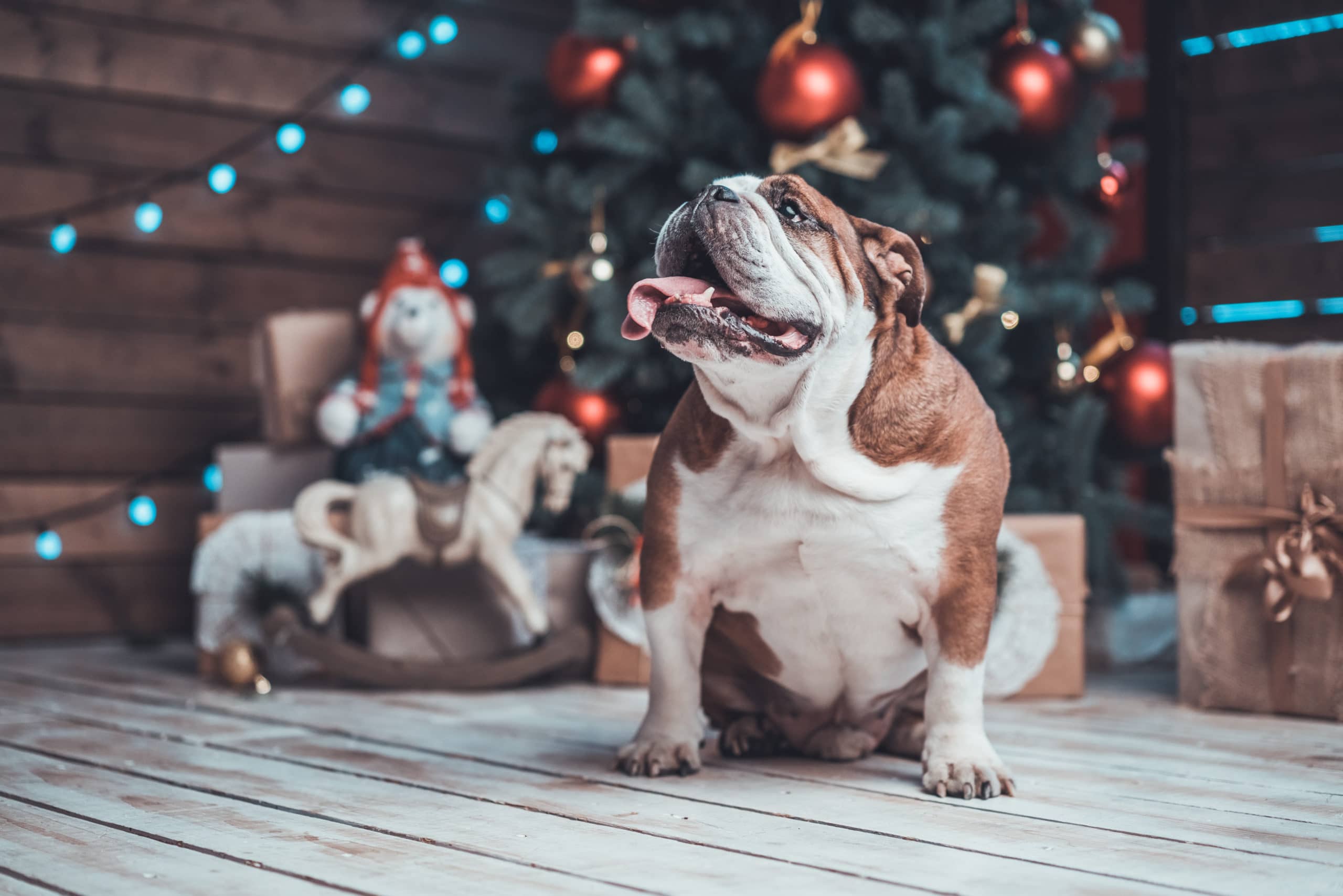 We know, there are a lot of British dog breeds on this list. Once again, here are some well-known British Christmas Traditions.

Since Bulldogs love food, they’ll definitely love a typical British Christmas dinner, which is kind of like an American Thanksgiving dinner. Turkey, stuffing, and cranberry sauce are often on the menu, along with sausages wrapped in bacon, every pup’s dream holiday treat! Christmas pudding or trifle seem to be hugely popular desserts, but since most of the ingredients are toxic for dogs, they won’t get to try them out.

In the U.K. Santa Clause is called Father Christmas. Just as in the U.S. he leaves presents and full stockings for all the good little boys and girls, and coal for, well, everyone else. Bulldogs are usually power-chewers, so bones or other chew-toys make great gifts for them! Curling up on the couch to watch Christmas TV specials is a tradition all Bulldogs will really love. They’ll also really enjoy watching their humans decorate or bake various Christmas treats. The only part of Christmas that a Bulldog might not take to. Christmas carols! It’s the breathing involved; you understand.

We hope you’ve enjoyed our quick look at the always appealing Bulldog! The next breed on our list is, well, another Bulldog, the French Bulldog!