Welcome back to our December blog series, in which we show off the year’s most popular dog breeds, as recorded by the American Kennel Club (AKC.) We’re down to our final two dog breeds and coming in second place is the beautiful and versatile German Shepherd Dog!

The German Shepherd was created to be a herding dog, but he’s capable of lots of other jobs, as well. He can be a police or military K9, a search and rescue dog, and a service dog. In addition, the GSD makes an excellent active family companion. Shepherds do require a lot of exercise and consistent training to meet their fullest potential, but they are definitely worth the work! 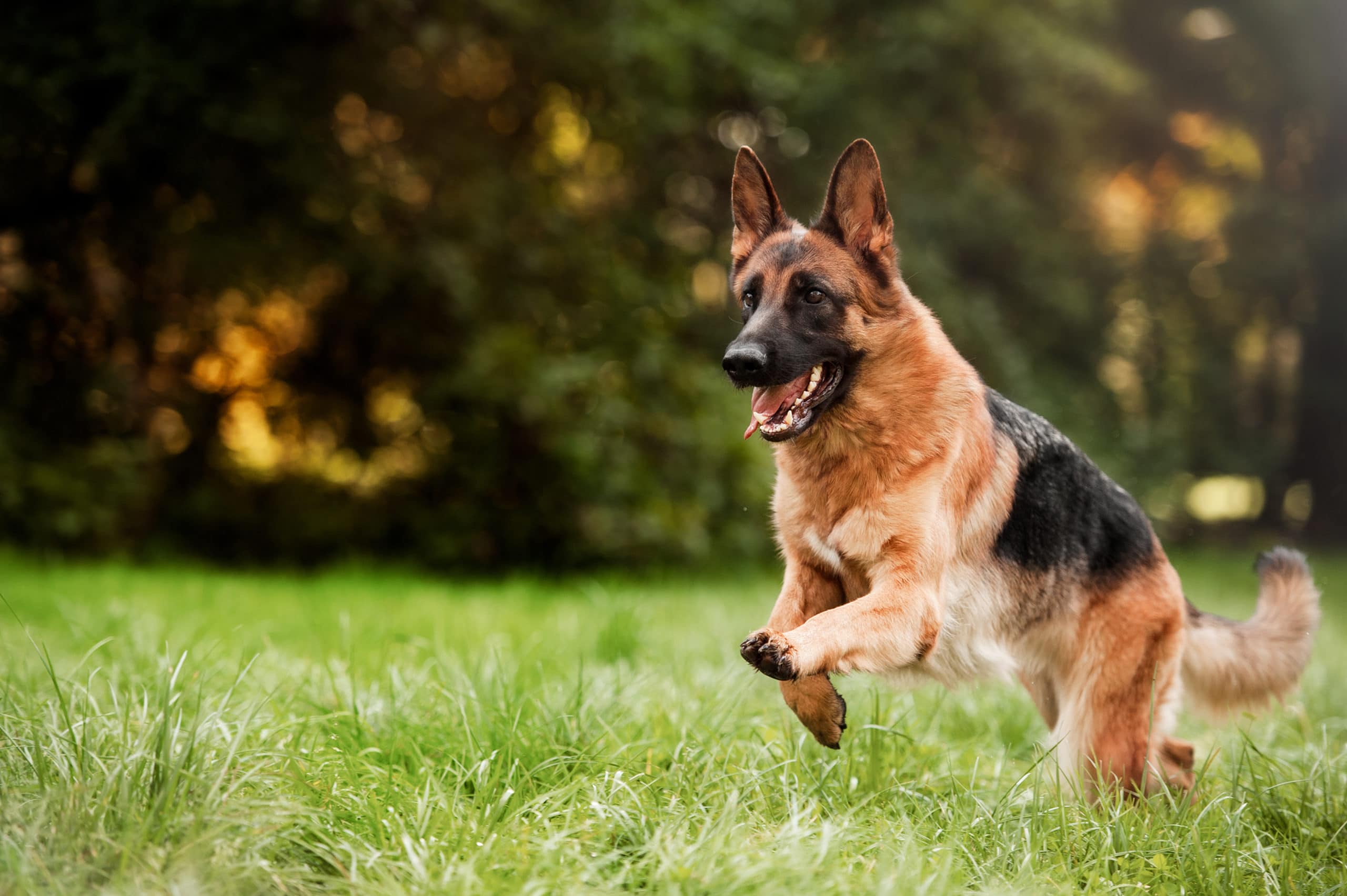 German Shepherds stand between 22 and 26 inches at the shoulder and can weigh anywhere from 50 to 90 pounds. Their coats come in two types, the usual normal coat that is medium-length and relatively course, or a long, soft coat that is much denser and feels more like the fur of a Collie. They are always supposed to be longer than they are tall. The GSD is also known for a smooth, effortless trot.

If you’re thinking about getting yourself a GSD, you should know that this breed sheds, a lot! Many groomers actually call them “German Shedders,” and with good reason. They need daily brushing to keep them looking their best, especially the long-coated variety, but should only be bathed every six weeks or so. As with any breed, nails should be trimmed at least every four weeks, and teeth should be brushed at least once a week for optimal dental health and fresh breath.

GSDs are beautiful, intelligent dogs, but unscrupulous over-breeding has resulted in an increase in health issues for this breed. They can suffer from hip and elbow dysplasia, which is typical of almost all popular dog breeds. Also, German Shepherd breeding dogs must be tested for a disorder called Degenerative Myelopathy (DM.) DM is a neurological disorder similar to Multiple Sclerosis in humans and results in a slow, creeping paralysis of the dog’s hindquarters. Again, there is a genetic test for this disorder, so ask your breeder to see the results before choosing a puppy. Allergies are becoming increasingly problematic for the German Shepherd, so be sure to ask your breeder about this as well.

German Shepherds bond very intensely to their humans. They can be rather aloof with people they don’t know but very affectionate toward their human family members. Because GSDs are bred to be protective, they must be socialized early and often in order to help prevent undue suspicion or anxiety. Also, German Shepherds must be taught how to be left alone from a young age in order to minimize separation anxiety, which can be a problem in the breed.

A well-bred German Shepherd is very intelligent and highly trainable. They should start training as soon as soon as possible to help them become happy household members. Consistency is very important with this breed. They are happiest when they have a purpose. This can be anything from participating in a dog sport to having a job like service work. Even learning tricks will help your Shepherd feel needed.

German Shepherds generally need daily exercise. They love long walks, hiking, playing fetch, or just about anything active. GSDs excel in a lot of different dog sports, including obedience, rally, agility, and tracking. They have also been used as guide and service dogs for people with disabilities, search and rescue dogs, and of course police work.

As his name suggests, the German Shepherd was created in Germany during the late 19th century, primarily by a German military captain who wanted to develop an all-purpose working dog. The result was a herding dog with striking good looks, intelligence, and versatility.

These adaptable dogs soon attracted the attention of dog-lovers throughout the world. The first GSD came to the United States in 1906, and the AKC registered its first German Shepherd in 1912. 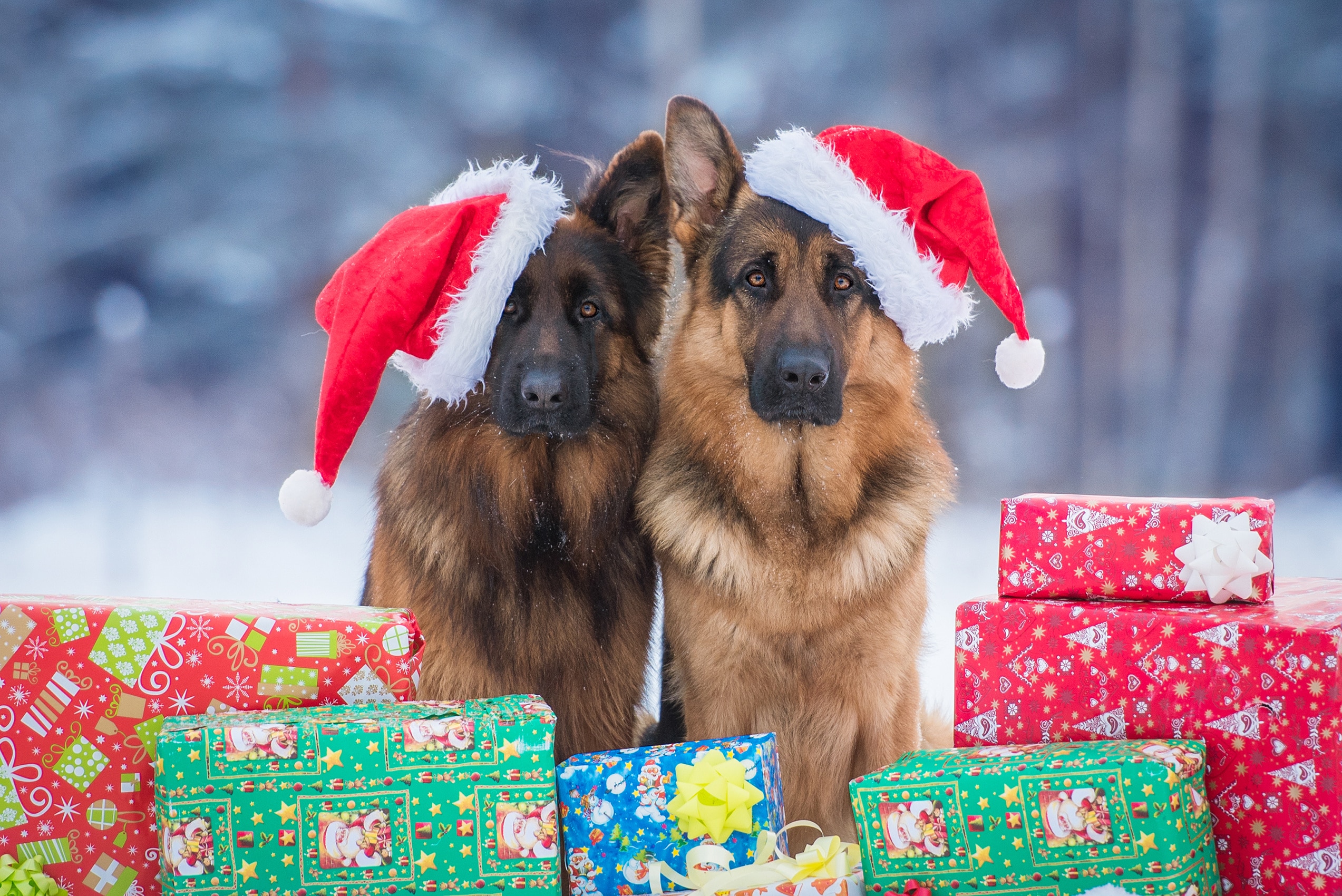 German families begin Christmas preparations throughout the month of December. Four Sundays prior to the big day, they make an Advent wreath out of either fir or pine branches with four colored candles. It’s common to light a candle on the wreath every Sunday, sing Christmas carols, and eat Christmas cookies.

Baking Christmas cookies, especially gingerbread, is a popular holiday pastime in Germany, just as in the United States. Christmas cakes and special spiced breads are also popular. On Christmas Eve, families spend time celebrating together and eating a Christmas feast featuring roast goose, turkey, or duck. Gifts are a big deal in Germany, just as with any other country. Ideal gifts for a German Shepherd include puzzle toys, balls, or frisbees. Squeaky toys are also popular with these active, playful dogs!

We hope you’ve enjoyed our quick look at the brilliant, magnificent German Shepherd. Check back soon for our final post in this series, featuring the number 1 dog breed in the United States!