The seventh most popular breed of 2020 is the Rottweiler. These gorgeous, confident members of the working group happen to be the largest breed on our list this year! Unfortunately, they are also the most controversial breed. While the Rottweiler can be lots of fun for many owners, there are a few things to keep in mind if you’re considering this breed.

The Rottweiler is probably one of today’s most recognizable dog breeds. His large size, dark coloring, and big head make him appear rather imposing. Rotties are strong, loyal, and intelligent. Generally, Rottweiler fans fall into one of two camps, those who consider them to be loving, gentle giants, and those who prefer their dogs to be anything but. This latter group has, unfortunately, caused the Rottweiler to make the news, but for all the wrong reasons. The bad press has caused problems for the breed in the form of dangerous dog bans, but reputable breeders are trying to restore their breed’s reputation.

The Rottweiler is a big dog, standing anywhere from 23 to 27 inches at the shoulder and weighing anywhere from 75 to 110 pounds. Females are on the smaller end of the spectrum. This is a muscular breed with a short coat that is black with rust or tan markings. Like all double-coated dog breeds, they shed year-round, especially during the Spring. Generally, all they need is a weekly grooming session. Nails should be trimmed at least once a month, and teeth should be brushed on a weekly basis.

These dogs are generally healthy, but they are larger, so joint issues can occur. It’s a good idea to get a puppy from a breeder who tests for things like hip and elbow Dysplasia. This is another breed that is prone to excessive weight gain, so daily exercise and a good diet are very important.

The Rottweiler is smart and loves to learn, but it’s important to keep in mind that they were originally bred to herd cattle and protect them from danger. More recently, they’ve been used for things like police work and protection, so they do have an independent streak. They can also become territorial and suspicious of strangers. Early socialization, basic obedience training, and consistency can do a lot to mitigate these issues.

Rottweilers love having a job to do and enjoy participating in a variety of activities with their people. They compete successfully in obedience, rally, and protection sports. They also enjoy carting, search and rescue, herding, and, of course, they make excellent police dogs.

If properly socialized, Rotties can do well with children, but they are big and quite playful at home, so are not recommended for homes with kids under 7. They have a moderate energy level, so a couple of 30-minute walks throughout the day should be sufficient. Puzzle toys or other activities that will let these dogs exercise their minds also can be helpful. With an owner committed to fair, consistent training, these magnificent dogs can make fantastic pets or working partners.

Rottweilers are yet another dog breed that comes from Germany! Their ancestors were Asian Mastiff types that traveled to Germany along with the Roman legions. Their job was to herd all the cattle the armies needed for their food supply. After the empire’s collapse, these dogs found work in the German town of Rottweil.  It was here, moving herds from pasture to market and protecting all the concerned from bandits along the way, that hey earned the name Rottweiler Metzgerhund or Butcher’s Dog of Rottweil.

The Rottie’s career in livestock ended with the rise of the railroads in the mid-1800s. Fortunately, they managed to find other kinds of work as police dogs, guard dogs, became a general-purpose working dog capable of doing any number of heavy-duty tasks. Rotties became some of the first guide dogs for the blind, and more recently have distinguished themselves as search and rescue dogs at disaster zones like the World Trade Center and Oklahoma City. The first Rottweilers came to the United States around the year 1901.

German families typically start their Christmas preparation at the beginning of December. It’s common for them to create an advent wreath out of either fir or pine branches, decorating it with four colored candles. The idea is to light one candle for each week of the Advent season leading up to Christmas. Singing Christmas carols is popular too, along with baking a variety of cookies and candies.

On Christmas Eve, families spend time celebrating together and eating a Christmas feast featuring roast goose, turkey, or duck. Your Rottweiler will feel right at home sampling any or all of these delicious menu options! The main course is accompanied by sausage and apple stuffing, red cabbage, and potato dumplings. A popular Christmas dessert is Stollen, a delicious bred that often contains fruit, nuts, and various spices. 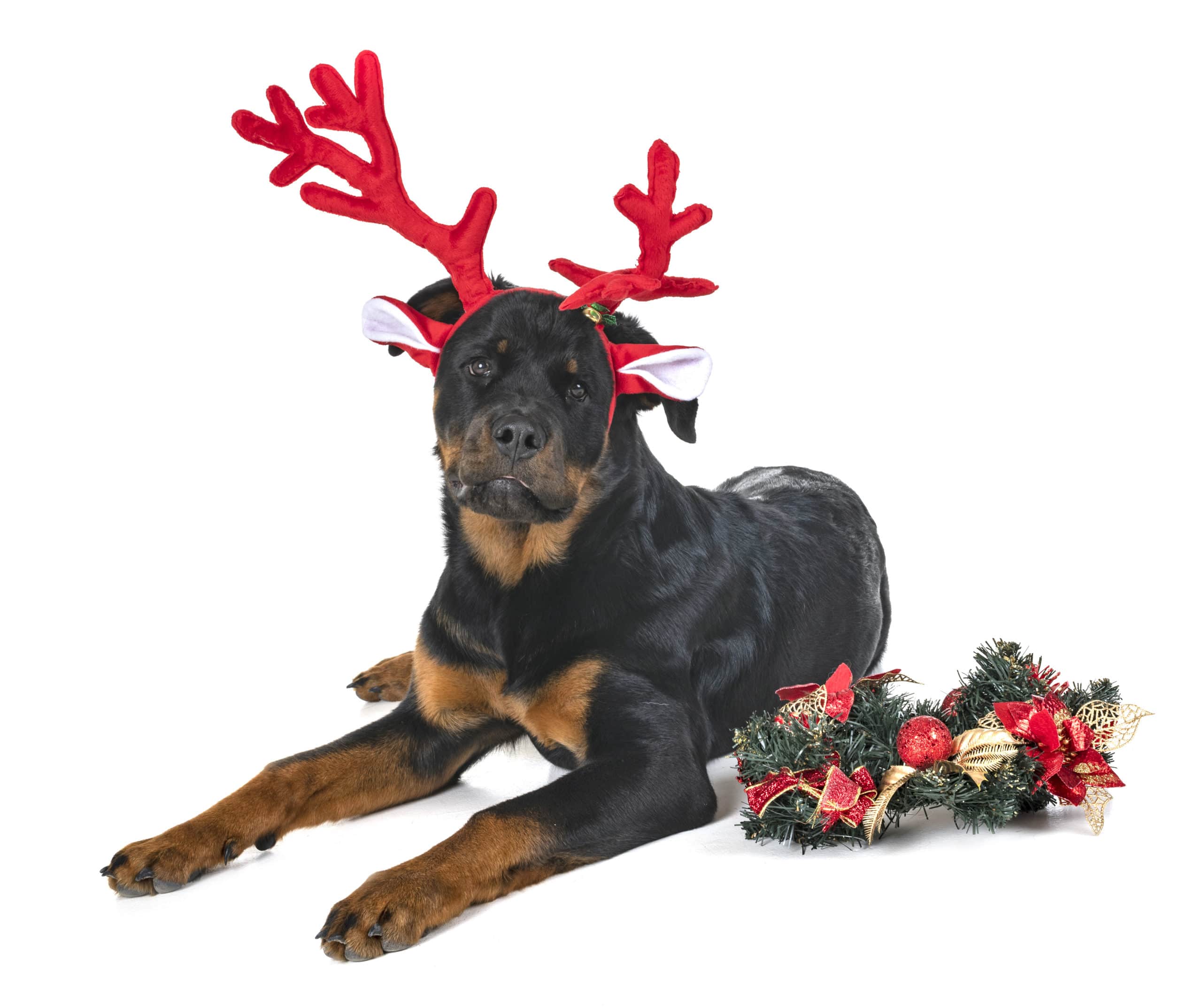 We hope you’ve enjoyed our brief overview of the Rottweiler! Come back soon to learn more about dog breed number six, the Poodle!