Welcome back to our Twelve Breeds of Christmas blog series, where we celebrate the most popular purebred dogs of 2020, according to the AKC. Nosing in at number 8 this year is our friend the Beagle! Beagles are the highest-ranking member of the hound group for lots of reasons. They make great family pets or fun companions for anyone who enjoys the outdoors. They have engaging, happy personalities, and they’ll even work hard if they get the right kind of job, that is!

Beagles make wonderful companions because of their compact size, low-maintenance coat, and happy outgoing personality. Beagles are also used as scent detection dogs at U.S. airports, where they search for drugs, weapons, and other contraband. Their friendly, happy nature is a big asset in this line of work, allowing them to find things without alarming people who might otherwise be more suspicious of a larger type of dog.

Like the Corgi and the Yorkshire Terrier, the Beagle comes from England. The breed was originally developed to hunt rabbits, which is why these scenthounds seem happiest when following their noses. In fact, the instinct to sniff out a scent trail is often so strong for a Beagle, that it overrides any and all training.

Beagles come in two sizes: 13 inch and 15 inch. The smaller variety includes Beagles no taller than 13 inches at the shoulder and weighing between 22 and 30 pounds. The larger variety ranges from 13 to 15 inches in height and weighs up to 35 pounds. All beagles have a short double coat that’s usually some combination of black, white, and tan. They shed all year, particularly during Springtime. Weekly brushing is usually sufficient, except during shedding season, when they’ll probably require daily grooming sessions. Be sure to clean the Beagle’s floppy hound ears on a weekly basis in order to prevent ear infections.

Generally speaking, the Beagle is a healthy breed. It’s important to keep an eye on their weight though because they are prone to obesity. This is partially due to their slightly slower metabolism relative to other breeds, but it’s mostly due to the Beagle’s love of food. Beagles take eating to a whole new level, and they’re rather notorious scavengers. Finding forbidden treats is like a fun game to them. They will learn to open trash cans, climb on counters, and even open cabinet doors in order to sniff out a snack, so Beagle owners have to learn to outsmart their very determined pooches!

While Beagles are happy and love being with their humans, training can be a challenge for them. Of course, Beagles are smart enough to learn commands, but they get really distracted by interesting scent trails. Once a Beagle starts to sniff, it can be difficult to regain its focus. It’s important to set this breed up for success by teaching them commands in areas free of distractions until they have a solid understanding of the concept. On the other hand, the Beagle will do virtually anything for a treat, which always makes training easier! Because they are hard-wired to follow their nose, off-leash walks are a no-no for the breed.

Generally, these pups need at least an hour of daily exercise to be happy. Since Beagles really need to indulge in a good sniff on the regular, it’s ideal to either have a fenced backyard or be able to use someone else’s. Keep in mind that Beagles are escape artists, so fences need to be built accordingly. Long walks on a leash are fine too, as long as you don’t mind letting your dog have time to use her nose. Most Beagles will probably not enjoy a five-mile run, but they love scent games and learning nose work. The best way to have fun with a Beagle is to teach him things that play to his instincts.

Beagles love almost all humans and get along well with other dogs. They’re adorable, hilarious, loving, and overall great family dogs. While they may be a little more work than other breeds at times, their endearing nature makes owning one more than worth the extra effort.

The origin of this ancient breed has been a subject of debate for centuries. No one is even really sure how the Beagle got its name. Some experts think the word “Beagle” is of Gaelic origin, while others insist it derives from a French term for the sound hounds make while hunting. There are reports of small hounds used for hunting rabbits and hare in England prior to the arrival of the Roman legions in the year 55 BCE. By the 1500’s, most English gentlemen owned packs of hounds–larger ones to hunt deer, and smaller hounds that tracked hare. These smaller hounds are said to be the ancestors of the Beagle we know and love today.

The Beagle gained popularity because their smaller size made it possible for people to hunt with them on foot. Beagles made hunting more affordable to the average individual without the need for expensive equipment. Beagles began arriving in the United States shortly after the Civil War, and quickly grew popular with American rabbit hunters! The AKC registered its first Beagle in 1885. Beagles still hunt rabbits, but they’re also used as detection dogs and make fantastic companions for pet parents all over the world!

If we want to get technical about this, which I certainly do, we must point out that the Beagle came before the first Christmas. We are still pretty sure his love of all things edible means he’ll really enjoy the typical British Christmas dinner, which is kind of like an American Thanksgiving dinner. Turkey, stuffing, and cranberry sauce are often on the menu, along with sausages wrapped in bacon, every pup’s dream holiday treat! Christmas pudding or trifle seem to be hugely popular desserts, but since most of the ingredients are toxic for dogs, they won’t get to try them out.

The Beagle’s unique, and loud, howling probably means he’ll add a special something to your Christmas carols. In England, religious songs are more popular, but these pups will bay their hearts out whichever songs you choose.

Beagles are a natural at finding food in stockings and gifts. For a fun Christmas game, try hiding his presence in interesting places and encouraging him to find them. Beagles will have a great time with this! If you want your pup to get in touch with his homeland, try to watch Christmas TV specials after dinner. The British equivalent to Black Friday is December 26, so Beagles will love sniffing out sales at a pet store! 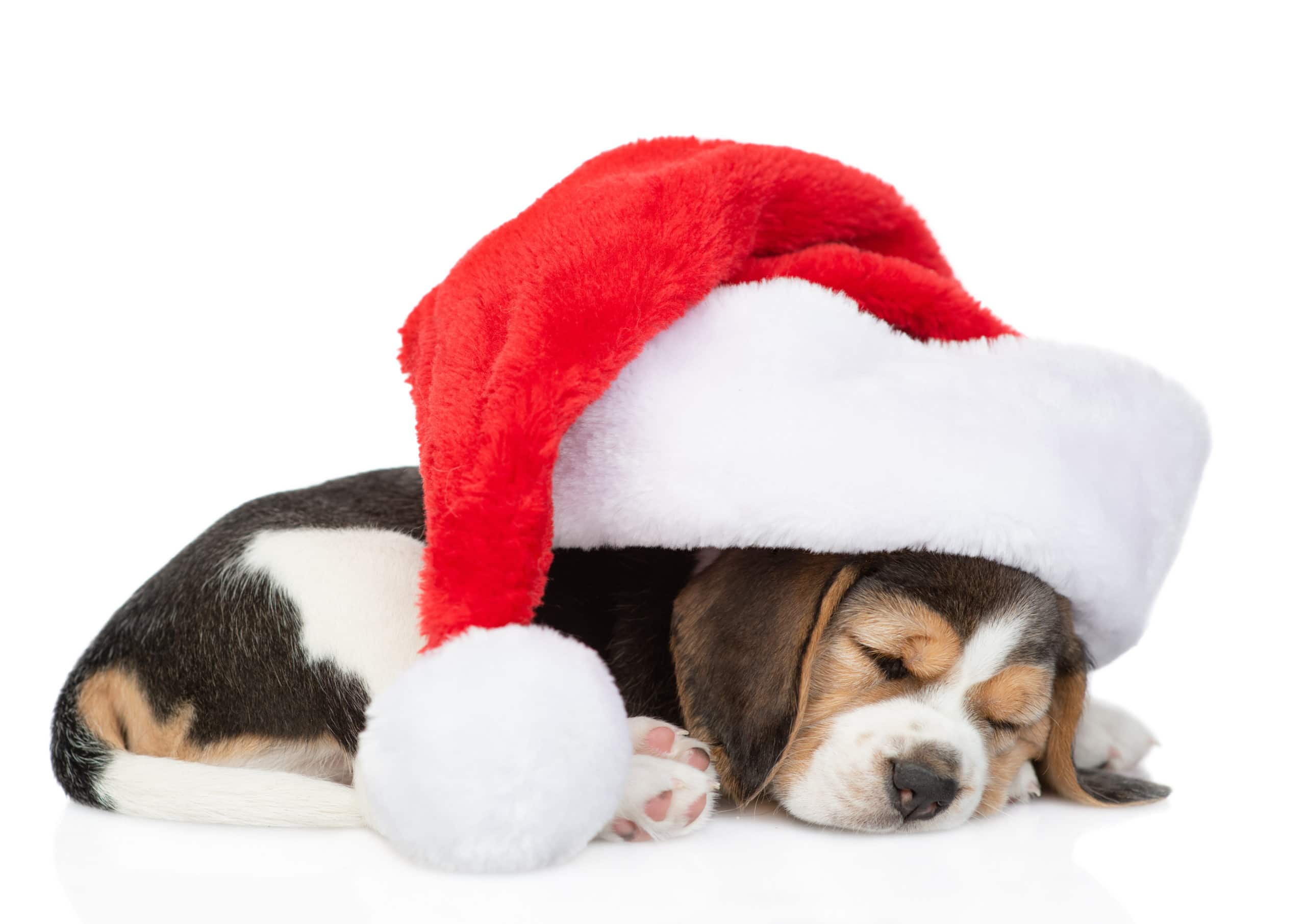