When we’re looking for a new dog to add to our pack, trainability usually becomes a factor. Or maybe we just want to know how smart our current pack members happen to be. Here are some of the things to think about when evaluating canine intelligence:

So which breeds have these traits. Which are the most intelligent and the most trainable! Let’s take a look. 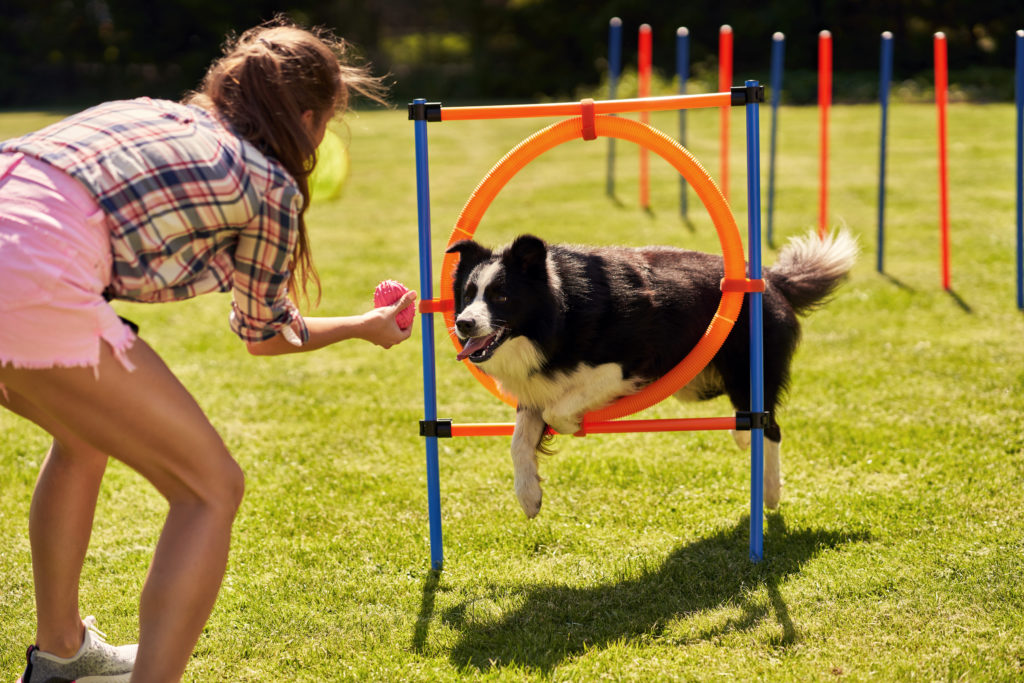 Border Collies are a highly intelligent breed. They have worked alongside humans as herding dogs for centuries, so they love spending time with, and pleasing, their human pack. They make wonderful family dogs, especially for people living on farms and ranches.

As for their trainability, Border Collies are known for their prowess in the obedience ring! While they do have tons of energy, it can easily be channeled into any number of tasks, especially those involving speed, agility, and stamina. One thing to note about Border Collies is that they’re not couch potato dogs. They need a job. It’s in their blood. So be sure a Border Collie is right for your household before you adopt.

Poodles are also extremely intelligent, and they’re eager to try almost anything, as long as it’s with their human. Poodles make excellent service dogs, agility dogs, and they also win lots of ribbons in the obedience ring. Since Poodles were originally bred as water retrievers, they’ll probably love Dock Diving as well. If you’re looking for a versatile and trainable new pup, definitely consider the Poodle. They’ll defy your expectations, again and again.

Everyone loves a Golden Retriever! They live up to their reputation, too. These sweet and friendly dogs are one of the best breeds in the world for kids, families, and anyone who enjoys cuddles on the couch with a gigantic fur-ball.

Goldens aren’t just good family pets though. The keen intelligence and calm temperament of the Golden Retriever helps them excel as service dogs, therapy dogs, and almost any other dog sport around. Consider a Golden Retriever if you’re looking for a pup that’s both trainable and huggable!

You’ve seen them waddling around the dog park, and probably you’ve purchased dog gifts featuring their adorable faces. Most of us don’t realize how smart these little dogs actually are. They have a good sense of discipline. They can perform tasks that require concentration and decision-making, and they respond quite well to obedience training. Plus, they’re full of personality!

You’ve probably seen the Doberman Pinscher in a lot of movies, but they’re not the vicious creatures Hollywood makes them out to be. They’re actually smart, sensitive dogs that are eager to please, and with the right training, they can become wonderful pets and excellent watch dogs. Their protective nature is one of the reasons this breed is so popular for police and military work. Once they’re attached to you, they’ll be yours for life. They also have athletic builds and lots of endurance that can be channeled into almost any task you choose. A well-trained Doberman Pinscher will be a life-long friend!

Another breed widely used for police and military work, the German Shepherd is well-known for its intelligence and work ethic. GSDs also do well as service dogs, in search and rescue, and at herding trials. These versatile, loyal dogs also make wonderful family pets and thrive on obedience training.

The Papillon is a big personality in a small package. They only weigh between six and nine pounds, and they have tiny, perky ears that resemble the butterflies they’re named for. Papillons also love training. They’re curious and fun-loving dogs, so everything is an exciting new adventure for them. These little dogs are quick learners who can pick up new commands or new routines without a problem. If you’re considering a smaller addition to your household, give the Papillon a chance. We’re pretty sure you won’t be disappointed.

These are just a few of the most trainable dog breeds. If you’re looking for a new furry friend, just remember that every dog is different. Even dogs from less intelligent dog breeds can learn the basics, so intelligence is only part of the package.